Browns' Joan Burstein on 50 years in fashion: 'I was the first woman to wear trousers in Claridges'

Browns' Joan Burstein on 50 years in fashion: 'I was the first woman to wear trousers in Claridges' 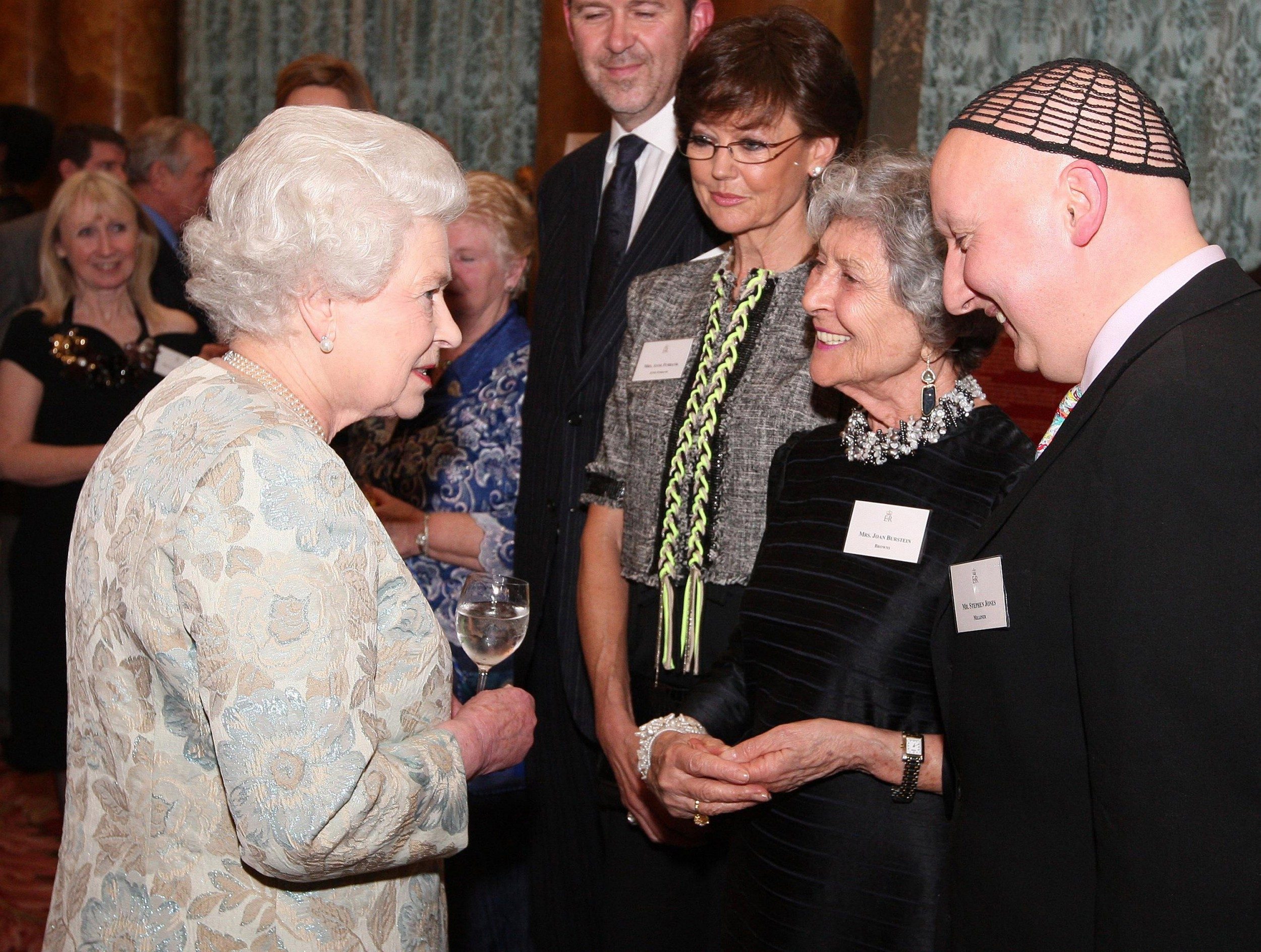 Staying power in the fashion industry calls for originality, determination and a not inconsiderable streak of moxie – all qualities Joan Burstein possesses in spades. Take the time the retailer set her sights on adding Calvin Klein, then a hot, young New York designer, to her roster at London boutique Browns in the early Seventies.

“I had tried to get through to Calvin so many times, but was always stumped by his marketing lady,” Burstein recalls, her voice tremulous but bright with nostalgia. “So I captured him at the bar at Studio 54. I introduced myself and said, ‘Look, I own Browns in London, and we would love to have you.’ He was ecstatic. He’d had great publicity but nobody could buy him in London. That was quite a coup.

“Not that I went there to chase him,” she sniffs. “I used to go dancing there every night in New York. It was the place to be.”

Studio 54 has been a Broadway theatre for more than two decades and Burstein, now 95 years old, hung up her disco shoes years ago. But Browns, the boutique she and her late husband Sidney founded in 1970, has persisted, and this year marks its 50th anniversary.

“It’s unbelievable, really, that it started 50 years ago and still has a reputation,” Burstein (always called Mrs B by the normally informal fashion industry) says over the phone from her Hampstead flat, where she’s been “very happy to be cocooned” since March.

When the Bursteins bought the shop at 27 South Molton Street from Sir William Pigott-Brown, naming it in his honour, Mrs B was committed to showcasing the height of fashion – always with an element of fun. “We wanted to create an ambience that would make everybody happy,” she says. “I think we achieved that.”

The future big names she imported included not only Klein but also Donna Karan, Ralph Lauren (when she approached and offered to open a store, describing the success she’d had with Klein, “He said, ‘I’d love to, but I’m not known like Calvin.’ ”), Giorgio Armani, Jil Sander and Comme des Garçons – all titans today, to a degree that makes it astonishing to realise that one woman was responsible for introducing them to the UK.

“Of course I fell in love with Sonia Rykiel’s collections. They epitomised everything about how I wanted people to look, how they should feel about fashion, how they should feel about themselves…” She remembers wearing one of the French designer’s knitted, striped ensembles to Claridge’s. “The manager came up to me and said, ‘Madame, do you realise you are the first woman we’ve allowed in wearing trousers?’ It was an honour.” (As well as a matchmaking exercise: Burstein’s son, Simon, later married Nathalie Rykiel, Sonia’s daughter.) And then there was John Galliano, whose French Revolution-inspired Les Incroyables graduate collection for Central Saint Martins ended up in the Browns window. Diana Ross was his first customer.

Her talent-spotting extended to staffing. Jimmy Choo founder Tamara Mellon worked in Browns’ Azzedine Alaïa department, aged 17 (“When I left, I owed them more money than I’d earned,” she has said); leading hair stylist Sam McKnight did all the best barnets at Molton Brown, originally a salon co-founded by Mrs B’s daughter, Caroline.

What she sought when scouting unknown talent was a feeling. “It’s something that just grabs you inside, and you gasp when you see it. That’s the only way.” The designers had to be original and motivated, but mainly appeal to her instincts.

Instincts which occasionally led her into flights of fancy. “I was a bit mad,” she admits. Once she launched a sale in which she marked everything in the shop down to £25. “I thought, I have so many young people who come into Browns who love what we do, who are never going to be able to afford it. Now they can. I think it lasted two or three days and everybody had a wonderful time, including the staff.” One of her wealthiest clients never stopped boasting about a jewelled Hanae Mori dress – a collector’s item, really – that she snapped up for practically pennies.

“It gave her pleasure. That was my intent when I started Browns: to give people pleasure. You can get pleasure from looking good and feeling good – and getting a great bargain adds to it, too.”

She rode the changes until Browns was a mini-empire, expanding into five interconnecting stores on South Molton Street, with separate outposts for bridalwear, shoes and the Chelsea set. The one shift she never anticipated was luxury fashion going online. “I said no, no, no – it’ll never work. People want to feel things, they want to try them on. Well. I was proved very wrong.”

In 2015, the Burstein family sold Browns to Farfetch, the luxury ecommerce platform that invites shoppers to browse and buy from hundreds of independent boutiques. Browns, or Brownsfashion.com, as Farfetch quickly rebranded it, would be the company’s first brick-and-mortar shop. Founder José Neves drafted Holli Rogers, then at Net-a-Porter, as Brownsfashion.com’s CEO, with a remit to “pioneer the next retail frontier”. A new shop, Browns East, became a laboratory for integrating shopping online and off.

Rogers had big plans for 2020, including an anniversary event and the opening of a new flagship store. “Obviously we wanted to have a giant street party and invite everyone to celebrate,” says Rogers, also chief brand officer at Farfetch. “That’s not happening.” Instead, stores were closed for the first three months of lockdown. The company opted not to furlough staff and also honoured existing orders at a time when many other retailers cancelled them. “That could be devastating for these young brands. We wanted to play our part and support them.” In some cases, they even prepaid.

“It was a risk, but the consumer continued to spend, which was phenomenal,” she says. “This period has absolutely been challenging, but from a sales perspective, it’s remained very buoyant. Luckily we have a strong online business.”

The new flagship is opening soon too, on Brook Street, just around the corner from Mrs B’s beloved Claridges. Rogers says the key is online-offline integration. “The physical store is only open certain hours of the day, but digital is open all day long. What can we do to merge those two spaces even more?”

Rather than a pre-Covid-style fashion party or store opening, Rogers and co are marking the birthday with a campaign called Browns 50: The Height of Fashion. There’s a glossy photo shoot (produced in Covid-secure conditions), and they’re inviting designers, notable former staffers and fans to share memories of the store on social media.

“One of the things I’ve noticed most since I’ve been in this job is what Browns means to people,” Rogers says. “I’ve heard so many stories from people about how they saved money for ages to go to Browns and buy their first Armani jeans.” Last year, during a doctor’s visit, her physician showed her a photograph of an incredible Comme des Garçons jacket he bought at Browns in the Eighties. “It was quite incredible. If people are touched by it, that’s fantastic.”

Should the opportunity for a rule of six-type celebration arise, Mrs B, at least, knows just what she’d like to wear. “I have a dress in my wardrobe downstairs just dying to be worn. It’s a Sonia Rykiel dress I wore to my daughter’s first wedding, in 1970. I looked at it the other day and thought, I wonder if I could get into that? It would be perfect.”